The Androuno (the narrowest street of the world)

17th C
Back list
Gassin
The Androuno is the narrowest street of the World : at its narrowest point, tt measures 29 centimeters wide (11.41 inches), letting only one person pass at a time! It presents all the picturesque charm of the perched village of Gassin. Gassin has the "smallest street in the world", the Androuno.

Its name comes from the Latin 'andron', derived from the Greek ἀνδρών, men. He designated among the Greeks a part of the dwellings reserved for men. For Vitruvius and Pliny the Younger, the name characterized a passage between two houses or between two parts of the same house.

There are many 'androuno' in Provence. The term has long been attested and has appeared in glossaries and dictionaries since the 18th century. Frédéric Mistral, in his Tresor dòu Felibrige, gives the definition of this word: "alley", "cul-de-sac", "void that separates two houses", or "tower of the ladder", which can also evoke a reduced , a hiding place or a latrine.

The androuno can therefore be a narrow and uninviting alley, and therefore reserved for men. This is the theory mentioned by Canon François Durand. According to Claude-François Achard, the androuno is an "alleyway, a place to hide."

Consistent with the architecture of Mediterranean villages, these "covered passages provide effective ramparts against the assaults of the mistral, the summer heat wave, the sleet of spring or the snow showers". Today, several more or less fanciful functions are attributed to it: use in counting, or even the selection according to their size, of sheep, allowing the flow of water during severe thunderstorms or preventing the arrival of a man in arms.

The street has been recognized as the narrowest in the world by National Geographic! 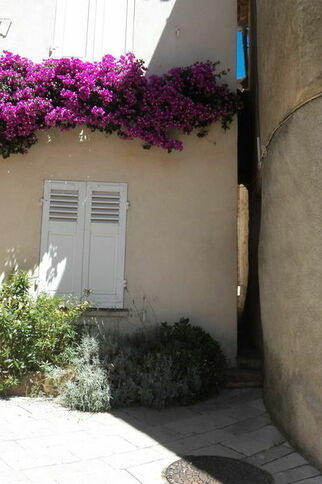